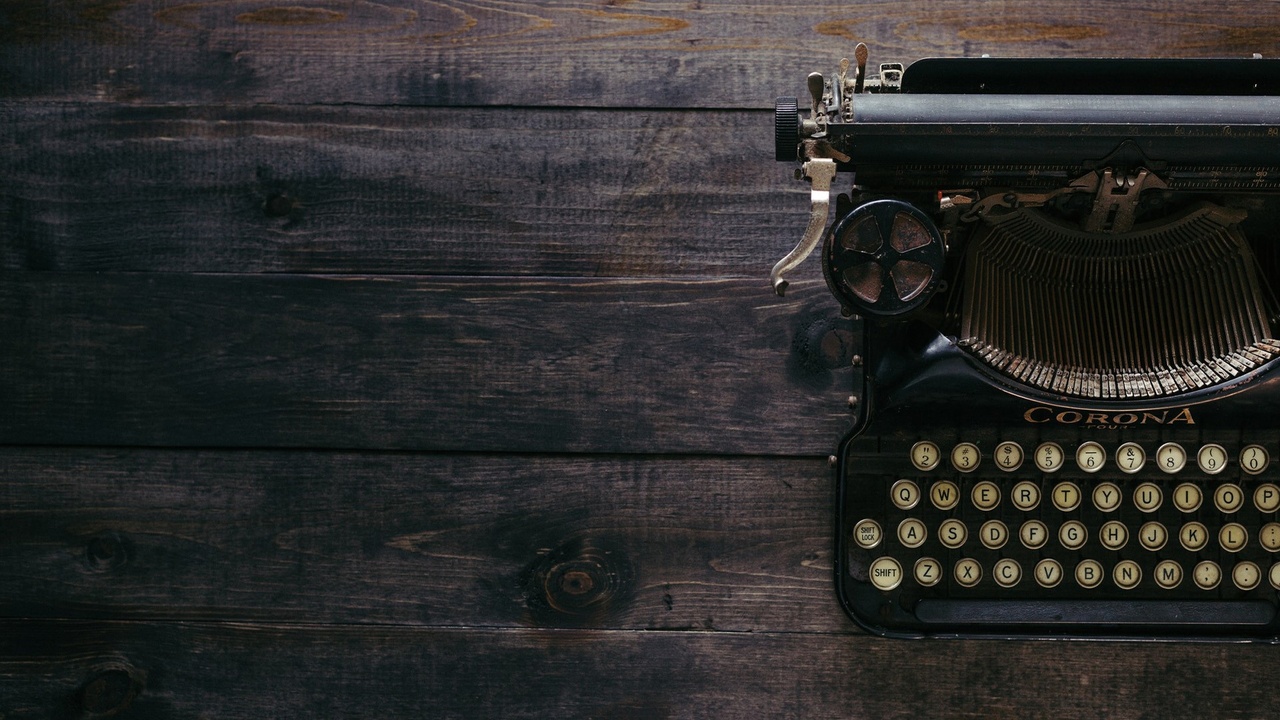 There is a wise Taoist aphorism that says, “I do nothing. And I leave nothing undone.” In an attempt to mock me and my interest in Eastern philosophies, Lolli, my middle one, scrawled this maxim on the sandwich board affixed above her bed. Apparently, she is applying this adage to her homework.

It’s not that our lives should be absent of ambition, but it is exhausting to be so attached to the outcome of it. Wu Wei is the Taoist concept of effortless action, of moving with the grain of life. For example, when we align with and follow our innate curiosity, we can experience creativity not as the “doer” but as the conduit. This is flow. We are “as” writing or “as” playing the piano. This sensation of being “lost in creativity” is akin to epiphanies experienced within meditation where the ultimate reality is momentarily unveiled. We are not the thinker of our thoughts or the feeler of our feelings. We are the blackboard upon which these phenomena are temporarily chalked. The Buddhists call this sunyata, the emptiness that holds everything.

Our scribe this Sunday is none other than one of my favorite poets, Jacqueline Suskin. I can’t hold a candle to her poetry, but, upon reading her musings on the nature of time and its perceived scarcity, I was inspired to pen some Taoist verse.

He appeared to me, the old rascal,
in the dark of night by the riverbank.
He tugged on a cigar,
his veiled lips transmuting leaf to smoke.
I complimented his long white beard.
“I was born with it,” he chortled.

“When were you born?” I asked.
He hooted again and took his cigar
and twirled it through the dark night
as if signing his name with a pen.
His brisk movement left an auburn trail
in the air that quickly faded.

“I was born just now.”
He pointed to the glowing ember of his cigar.
And with that he quivered with glee
and, jauntily, booted a giant pinecone
into the rushing river.
Quietly, we watched it bob atop the streamflow.

Always here. And here again now at [email protected] and you can follow my daily exhortations on IG @jeffkrasno.

P.S. If you want a bit of inspiration to write your own poetry, you can take Jacqueline's Commune course, Every Day Is a Poem, free for 5 days here.

A few months ago, I sat down to reorganize my writing desk. I do this from time to time as I finish projects, during big cleaning sprees, or when new ideas start blooming. I can’t quite recall the string of events that caused me to get into this particular spell of rearranging, but I found myself writing the word “slow” in big cursive letters on a piece of newsprint.

I sat and stared at the word.

Something about it was both deeply personal and yet universal. So many definitions and connotations began to arise, though in this impromptu meditation I also realized it would take me a while to untangle this four-letter word’s complex meaning.

I’ve been feeling exhausted lately, and I knew something needed to shift. This word was at the root of it. 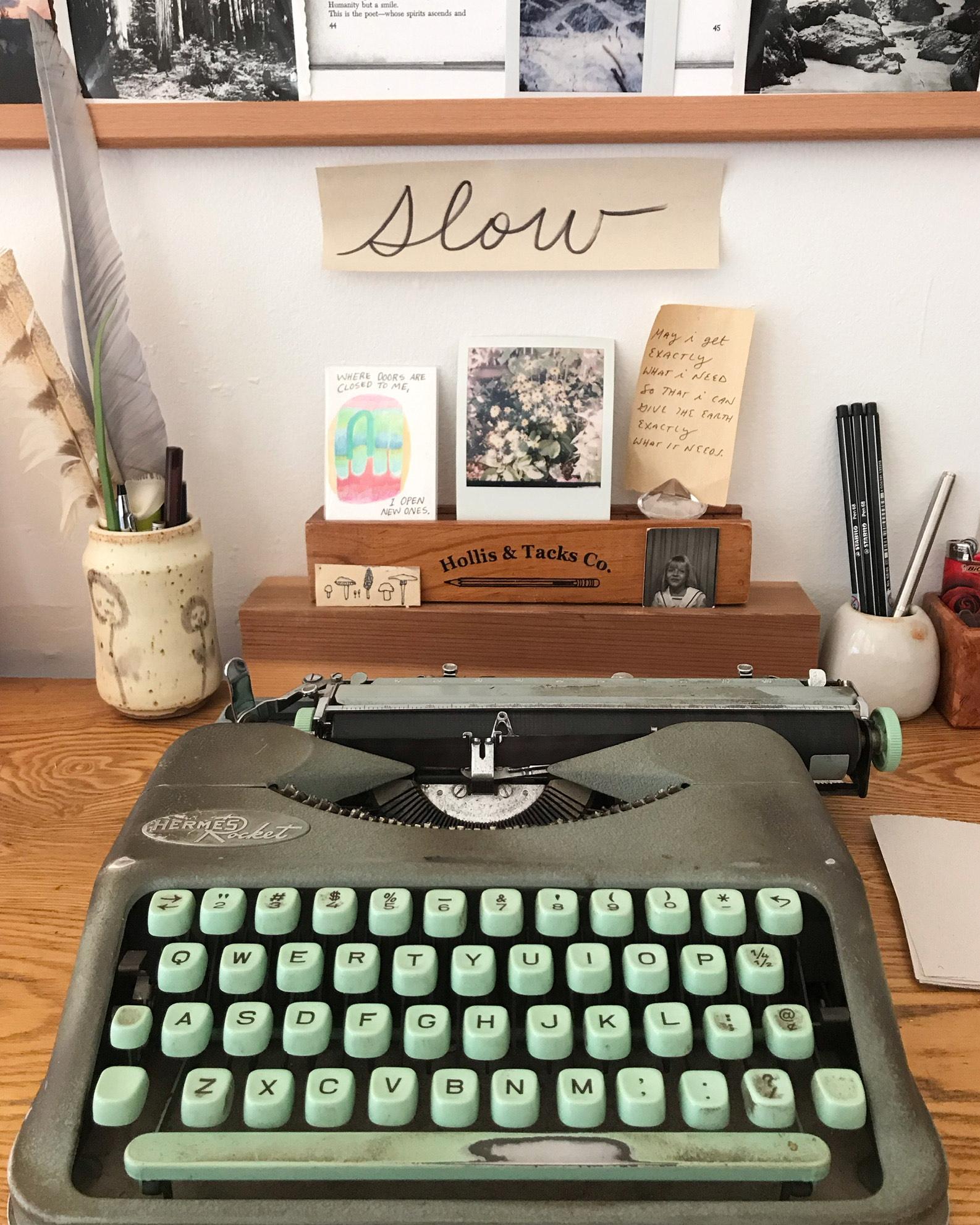 Although I work on a typewriter, I’m a fast artist. Whether hired for private events or at my farmer's market station, it’s been my job for the past decade or so to produce hundreds of original poems in just a few hours. This skill has become part of my identity and a major focal point in my creative practice. I process the world quickly, and my poetic lens keeps a rapid pace. Someone once called me the “YouTube of poetry…just give her a subject and she immediately creates a poem.”

For me, this immediacy is connected to channeling: letting language flow through me from the unseen muse, from my unfettered imagination. The speed is fun, interesting, entertaining and mysterious, so I never really questioned its impact on my well-being until recently.

Our current culture of technology ushers us into acceleration. In many ways, this is exciting and necessary. We have a lot of immense and pressing problems to solve, and I understand the hope behind uncovering these solutions as quickly as possible. In the midst of an unprecedented environmental crisis, we want to rise to the occasion and figure it all out before it’s too late.

But, as I’m finding, hurrying through the process of change isn’t necessarily the best method.

Artists tend to feel an incredible amount of time pressure. We feel the burn to serve the greater good, to help transform the human story. We also feel the weight of an economy in which many of us can barely afford to live, let alone find the time to conceive new, beneficial art. How are we to be the change if all we can think about is the hustle?

My mind was in a whirlwind about all of it — and then this single word emerged: slow.

What will happen if I change the rate of my output?

Will I be forgotten by the algorithm?

Will my audience disappear?

Will I return, brimming with new ideas, but find an empty room? How will I survive?

If I don’t rest, will I able to create at all? What does it even look like to slow down?

I spoke with my dear friend and fellow artist Hallie Bateman about this. Like most artists I know, she is sharing many of these same feelings. We mused on the concept of slowing down and Hallie asked me to write her a poem about it. I wanted to take my time with it, but true to form the words flowed out of me within minutes. 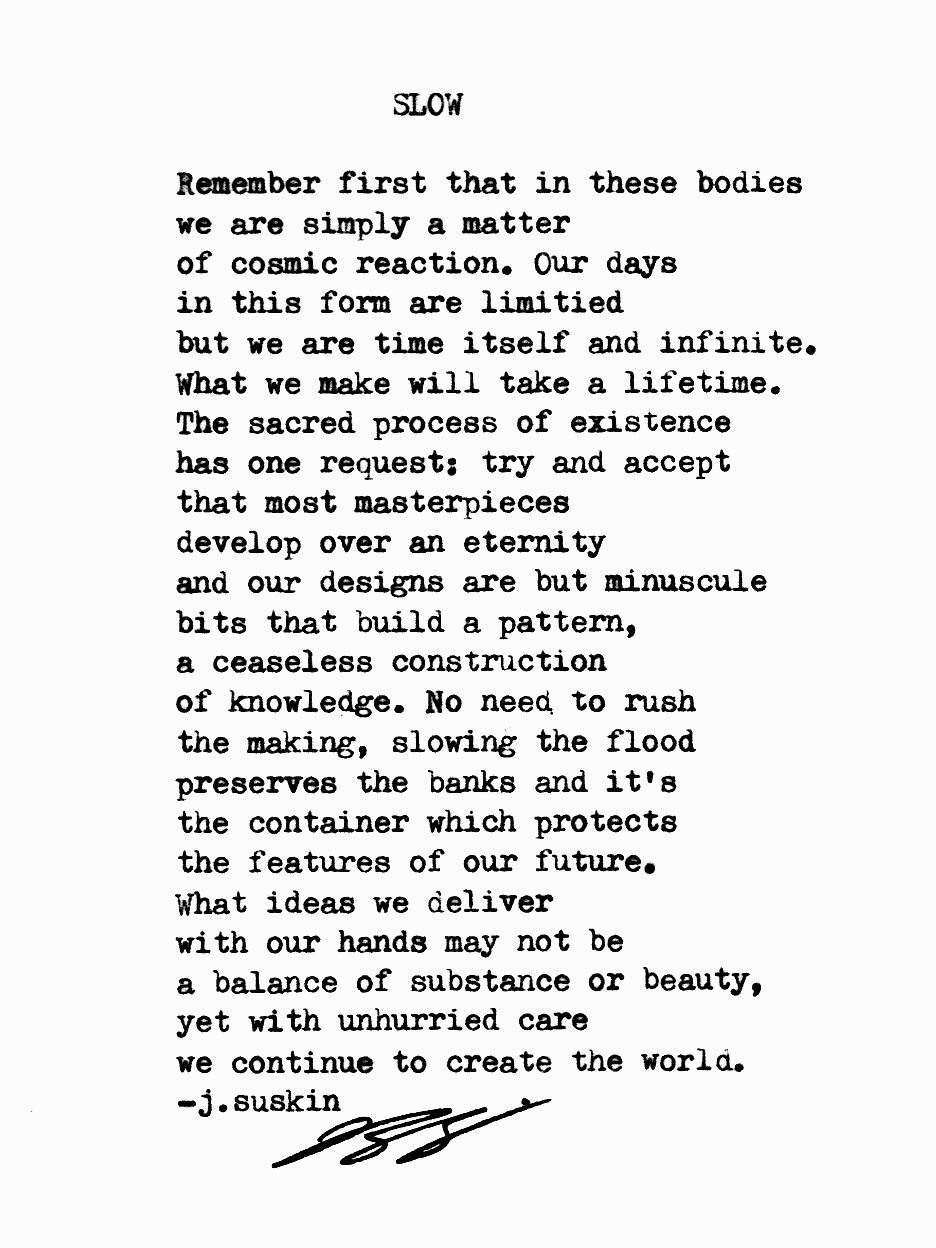 As I read over my work before sending it off to Hallie in the mail (a slow process I’ll always support), I felt the roots of the word “slow” take hold of me.

I am creating the world. I am all building it every moment, breath by breath, word by word. Most meaningful things take a great amount of time to unfold; most masterpieces take a lifetime to create. I may lose the attention of the algorithm, but I’ll gain so much more in the way of poetic insight.

This insight may produce a different path forward, a space for inspiration, for answers, for newness. It got me thinking about what my work actually is and I came up with this list in my journal. When I read over it I laughed out loud. All of these things take so much time and space! So much careful attention and groundedness!

No wonder I need a break from constant output. I have so much to attend to that is connected to an entirely different pace than the fast world of economy and brand identity. 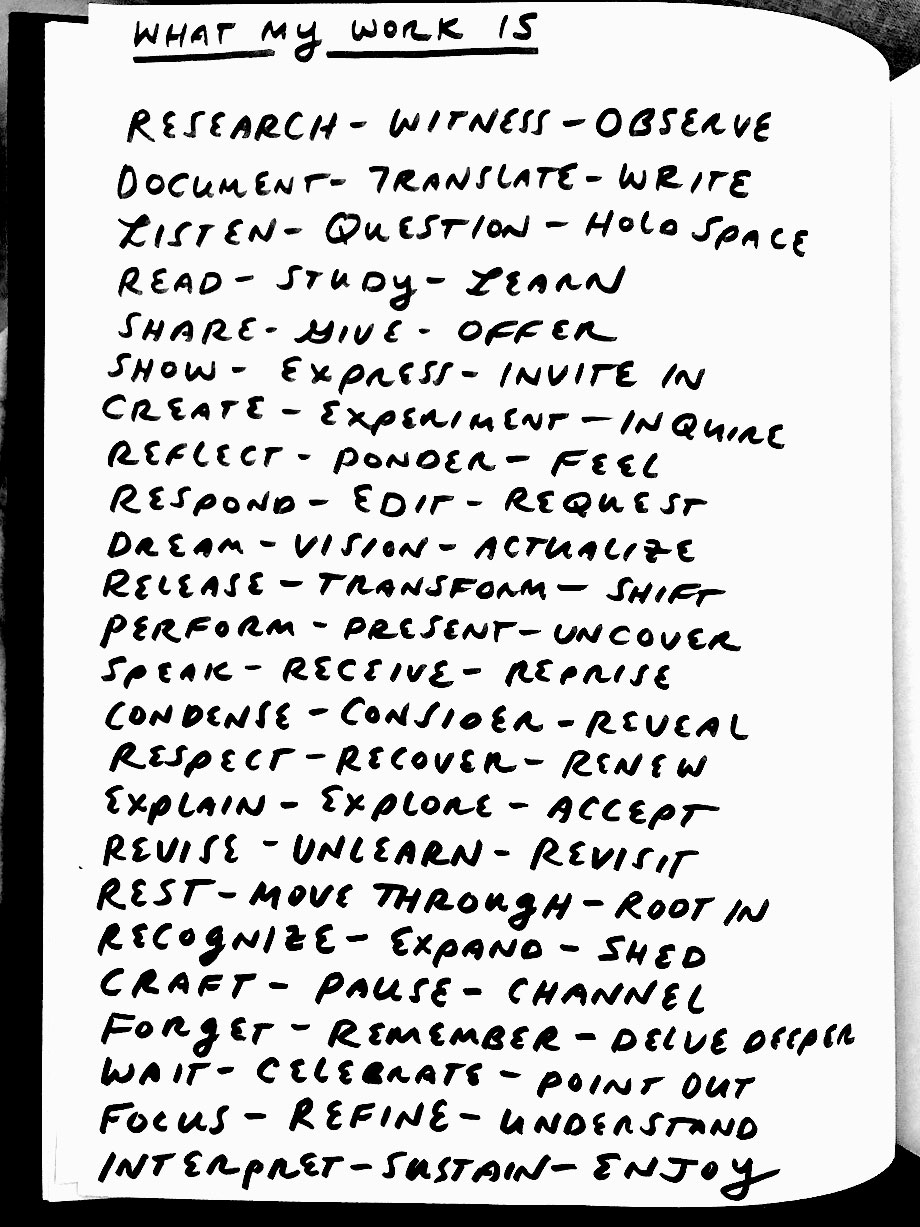 These thoughts are just the beginning of what might unfurl after I pause.

It will take time for me to practice this new pace, but I welcome it and all the wisdom that comes with it.

P.S. Because it also feels on theme, I will leave you with this recent poem on Capitalism. 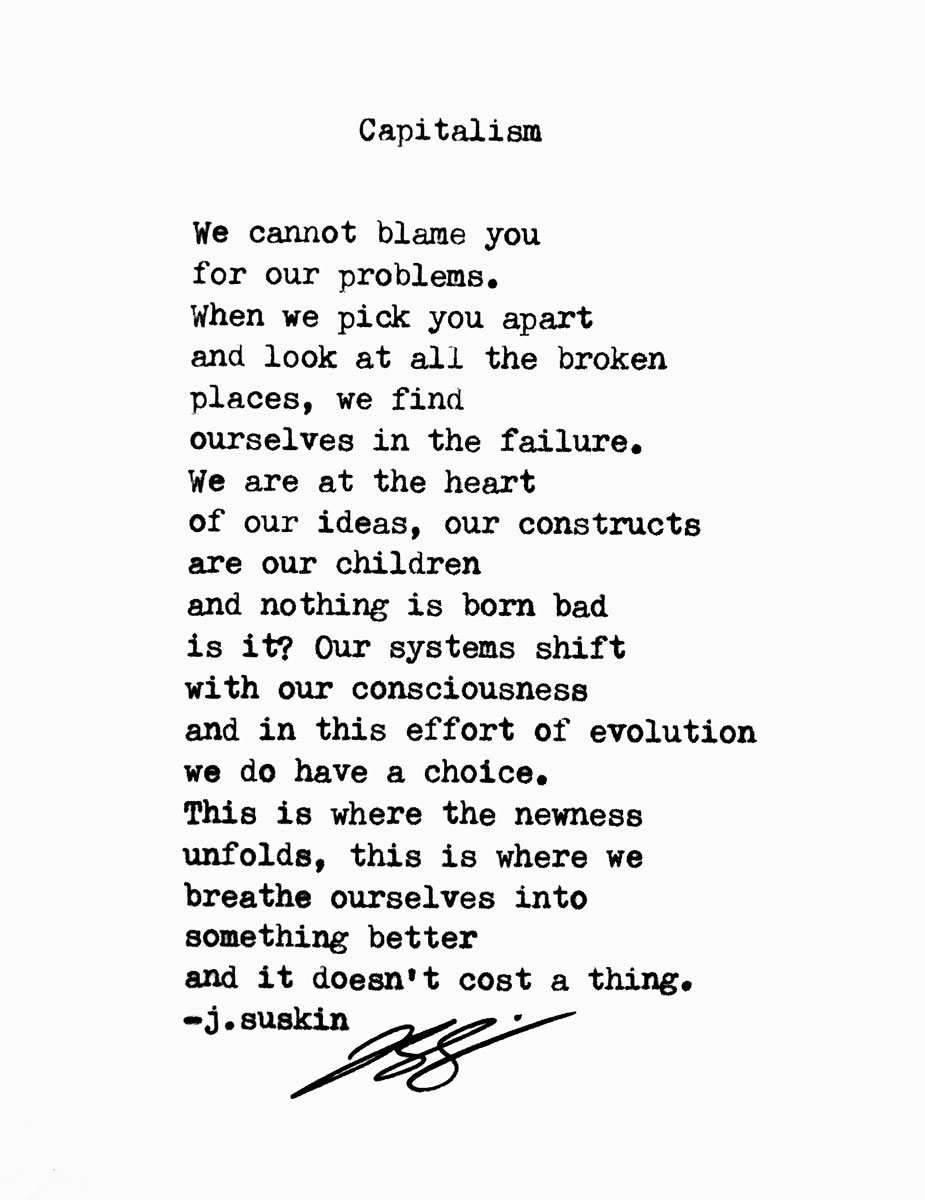 Jacqueline Suskin is a performance poet and educator who has been teaching workshops, writing books, and creating spontaneous poetry around the world since 2009. With her project, the Poem Store, Suskin has composed more than forty thousand improvisational poems for patrons who chose a topic in exchange for a unique verse. Her work has been featured in New York Times, T Magazine, Los Angeles Times, The Atlantic, and other publications. Her latest book is Every Day Is Poem.