Commusings: 5 Questions to Ask About Your Poop by Jake Laub 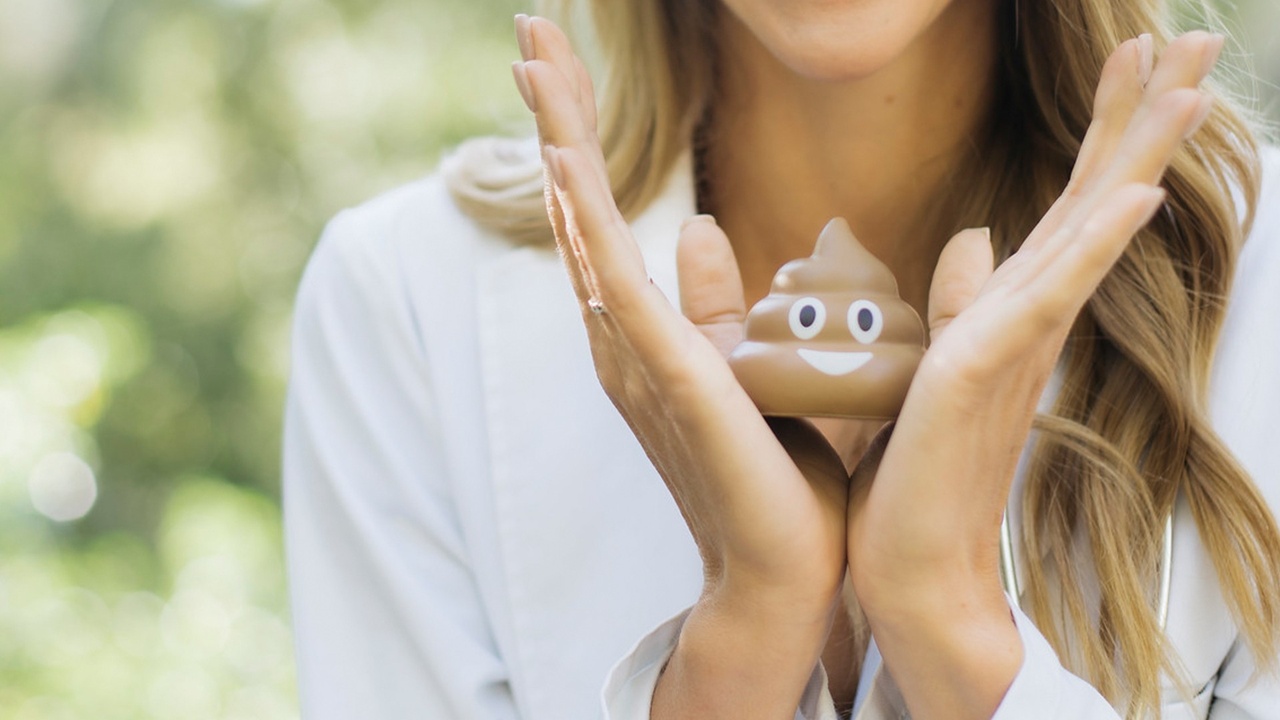 This week’s missive really stinks. I didn’t pen it. My business partner Jake did. He’s no Jeff Krasno but he’s a solid number 2. He’s been writing another article about constipation for weeks but it hasn’t come out yet.

I’m flush with poop jokes. I’m a dad, after all, and spent years wiping up mustard-hued baby glop.

Schuyler didn’t much believe in diapers so our daughters often toddled about bare-bottomed. This was risky when visiting other people’s homes.

One memorable night, Lolli made a significant deposit on our friend Kira’s living room floor during a party. We had many friends at the soiree but no one dandier than John. The steaming heap was a tractor beam for John’s Hermes loafer which, upon sinking into the pile, skidded forward causing John to lose his balance and spill his martini on his fitted trousers.

Kira, a mother inured to baby scat, grabbed the loafer in question and eyed it meticulously.

Schuyler made a half-hearted attempt to deny culpability, but upon closer inspection of the fecal residue on John’s posh loafer, one could clearly see undigested flax seeds and quinoa. The hippie parents were busted – brown-handed.

“Why get so upset? It’s mostly just bacteria,” Schuyler petitioned as we exited with our party-pooper.

If you give a crap, email me at [email protected] or follow my exhortations on IG @jeffkrasno.

In poop, don’t include me,
Jeff

5 Questions to Ask About Your Poop

We pack a lot into our 314-square-foot yurt “studio apartment.” The kitchen countertops are curved to maximize space. The baby swing and exercise equipment hang from the ceiling and are tied out of the way. All the yoga stuff tucks under the crib. Pots and pans live in the oven. But eventually people notice a key element is absent.

“Where’s the bathroom?” is the inevitable question.
At which point I open the back door, revealing a large sage bush.
“You go to the bathroom in the bush?”
“No,” I say, “Walk behind the bush.”

And there it is — our composting toilet, gloriously unencumbered on the hillside. 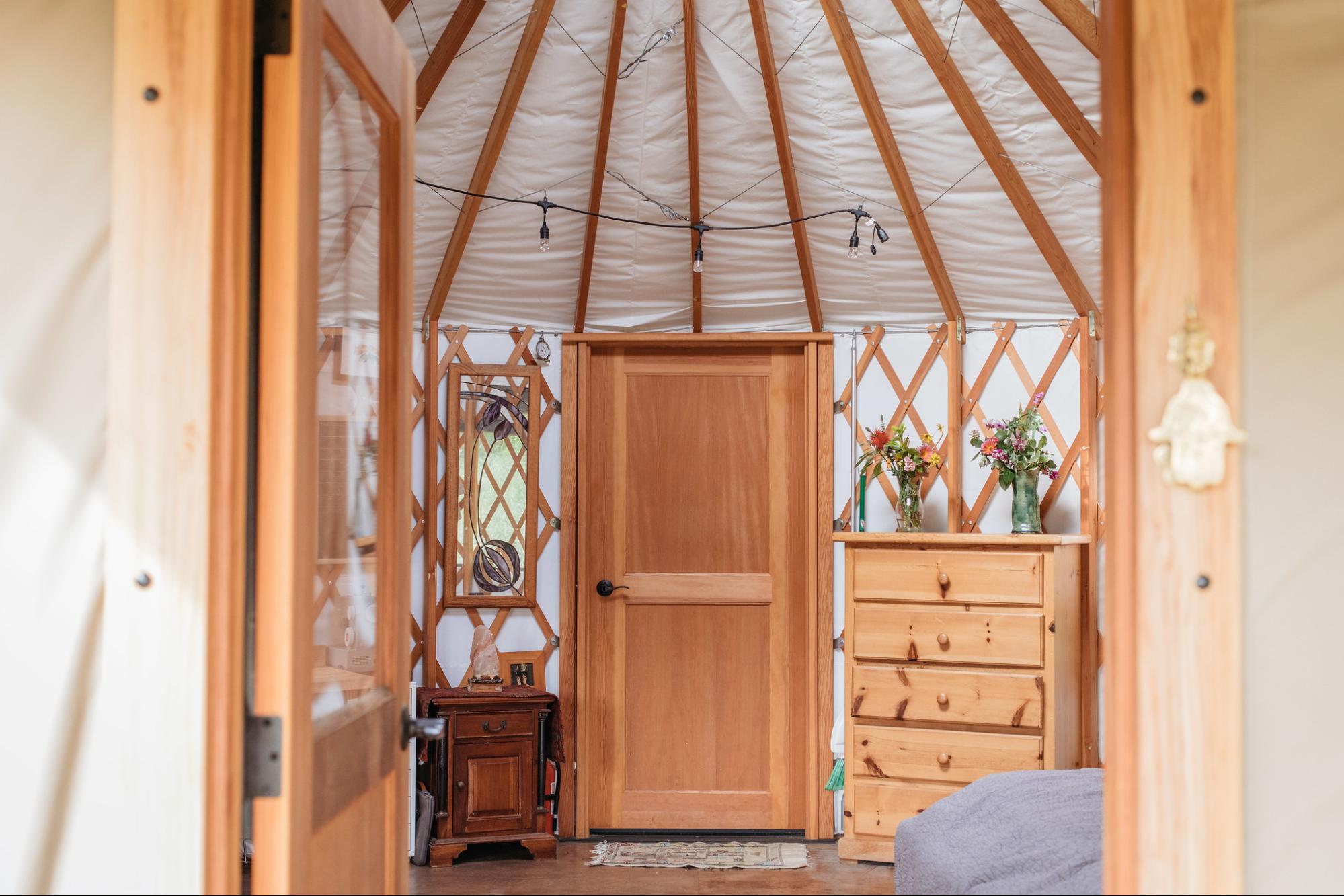 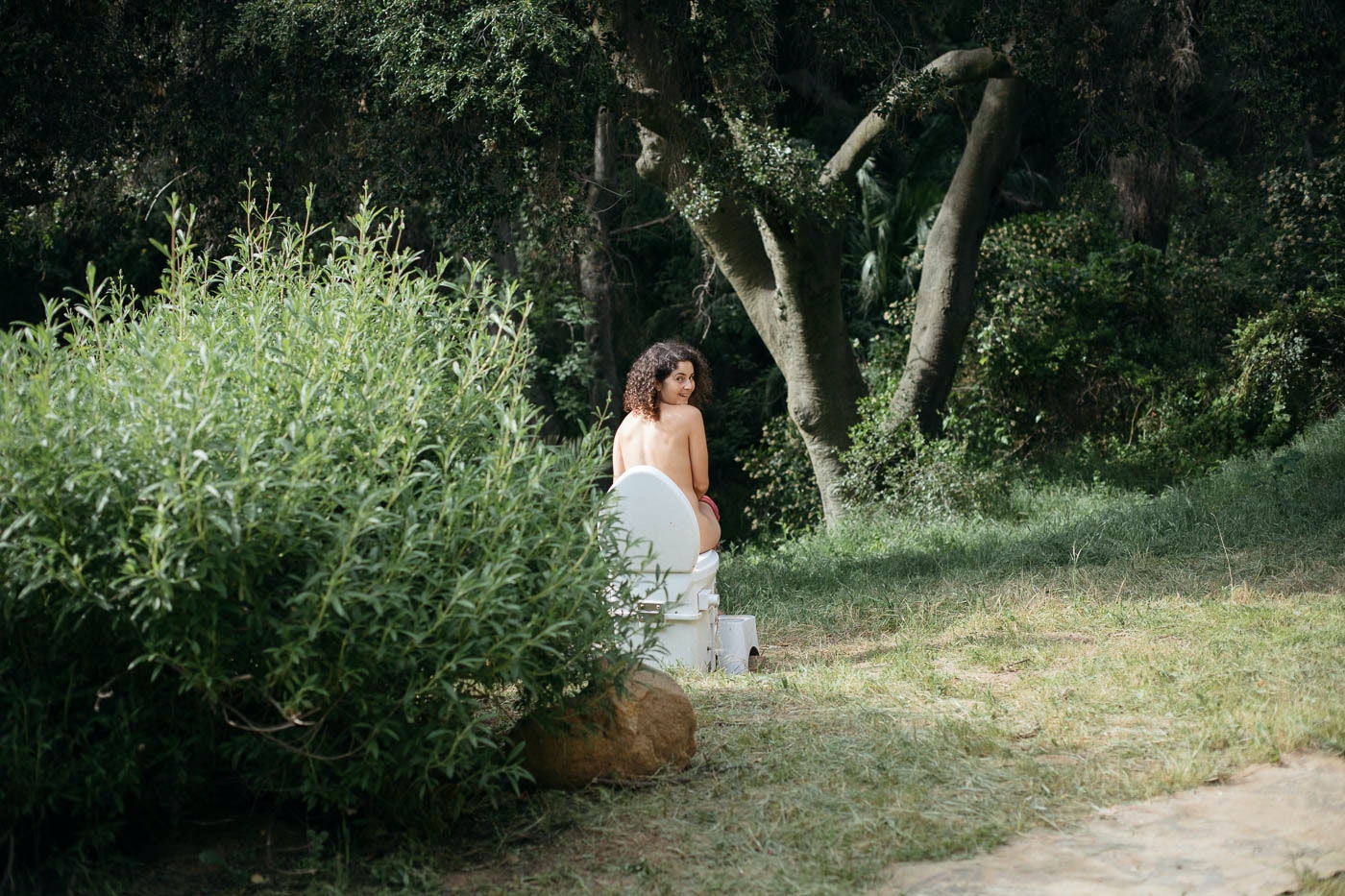 Julia taking advantage of our composting toilet’s many charms.

Composting toilets come in many forms, from the traditional burly, double-chambered orchard toilets built in sturdy wooden sheds to the sleek, metal, anaerobic composting commodes we have elsewhere on the property. Schuyler’s mother is infamous for moving a hole around her garden every few weeks and planting in the previous spot. The hole is accompanied by a simple-but-effective, toilet-seated box.

In our case, when we built the yurt we bought a compact model of the type commonly used in tiny homes. The assumption was that I would eventually build a small structure for it.

But, this being Southern California, for more than 2 years the toilet has lived comfortably out in the elements. Sure, sometimes you have to bring an umbrella with you, but the vast majority of the time you have the sun on your back, the smell of sage wafting by, and a view of an ancient oak tree while you do your business.

Which brings me to the business part. Beyond saving gallons upon gallons of fresh water (it’s kind of crazy that we purify water to the point of potability and then poop in it) and turning “waste” into plant nutrition, composting toilets have a less commonly appreciated perk: You get to have a relationship with your poop.

My partner Julia is a nurse, and now we have a baby, so poop talk is particularly nonchalant in our household. Julia can smoothly fit, “What’s for dinner and how was your poop?” into the same sentence. But unless you have a young child or are a medical professional, this might be disconcerting.

In our culture, bowel movements have become a taboo topic. But, as Julia would be quick to remind us, poop is one of the most valuable biomarkers of gastrointestinal health we have.

Approximately 60% of Americans suffer from digestive issues, including constipation, bloating, and irregularity. And some 50 million live with chronic constipation (1). We’re talking about straining, hard stools, wanting to go but can’t, abdominal discomfort, feeling like you haven’t quite finished, and spending way too much time on the toilet.

In our rush to get rid of this data dump each day, we don’t pay attention to the insights it could offer. Simple markers like Bristol stool type and regularity, if tracked, could tell you quite a bit about how your food and lifestyle choices are impacting your poop — and in turn, your overall health.

Which brings me back to the composting toilet: Poop is nitrogen-rich, so in order for it to compost properly you have to add carbon via a few scoops of pine shavings of leaf duff. In the case of a small composting toilet, and given that there is no magic watery pipe for your poop to slide down, when you turn around to toss in your carbon, there it is! Your poop du jour.

I mean, it’s interesting in a philosophical, “Wow, the universe works in mysterious cycles,” sort of way, but as a biomarker for overall health, what exactly should you be looking for?

Our friends at Seed have provided us with the answers to five poop questions we should all know:

What is your poop?
A normal stool is mostly water — around 75 percent. The rest of what you’re looking at is solid material that includes bacteria and other microorganisms, both dead and alive. Mixed with these microorganisms are things like food matter that has resisted digestion, dead cells from the body, inorganic substances (for example, excreted minerals), and cholesterol and other fats.

All told, a person often passes between 3 to 8 ounces per day. A bowel movement that gets a thumbs up from gastroenterologists (and Julia) is one that keeps its shape and is relatively soft and easy to pass.

What color is your poop?
Stool is typically brown due to bile breakdown products and bacteria. Your liver secretes something called bilirubin (a yellow pigment found in bile), which makes its way to the large intestine. Certain bacteria work to change this bilirubin to urobilinogen, which is then converted by other bacteria into something called stercobilin. This stercobilin is ultimately excreted through your number two, and gives it its characteristic brown hue.

However, color variations (green, light or clay-colored, yellow, black, and red) are possible. Variations in color can be a result of dietary inputs (food dyes, certain supplements or medications, vegetables with deep colors – like red beets) or a variety of medical issues (hemorrhoids, for example).

What shape is your poop?
When assessing the shape of your stool, the Bristol Stool Chart (shown below) is a helpful resource. Developed by Dr. Stephen Lewis and Dr. Ken Heaton at the University of Bristol in 1997, the Bristol Stool Chart is a universal classification tool for human feces. Think of it as a decoder for your toilet bowl — and a tool for understanding your digestive health. 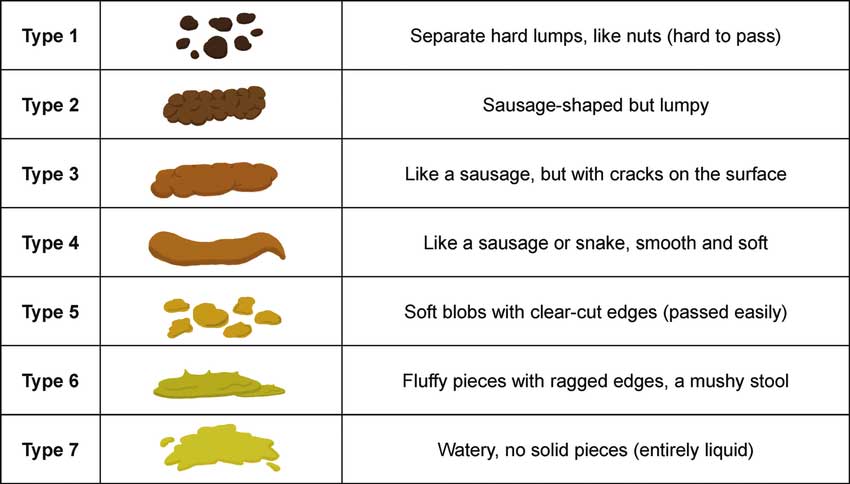 Ideally, your poop should resemble Type 3 or 4 — expelling in a singular sausage or snake-like shape. If your poop looks more like separate lumps, you’re probably experiencing constipation. On the other hand, if it resembles soft blobs or has no shape at all, you’re likely dealing with diarrhea. ⁠That said, most of us will, at some point in our lives, experience the entirety of the Bristol Stool Chart. One or two days of abnormal bowel movements is normal – common, even. It’s not until the irregularity becomes a pattern that intervention might be necessary.

What texture is your poop?
Remember: stool is around 75% water, and the hydration of stool plays a big role in texture. As with shape, the Bristol Stool Chart can be used when talking about stool texture. Ideal poops should be smooth (potentially with some cracks), resembling a Type 3 or 4 on the chart. Stools that are consistently hard, dry, or lumpy (Type 1 or Type 2) can be a sign of constipation, inadequate fiber intake, or dehydration. Loose, mushy, or liquid stools (Type 5 or Type 6) indicate diarrhea, but depending on the severity or duration can also suggest a food intolerance or infection.

What can I do to support healthy poop?
Much of what you do on a daily basis contributes to your digestive health and function: what you eat and drink, how much (soluble and insoluble) fiber you ingest, your response to stress and anxiety, the quality and duration of your sleep, how much exercise you get, and your choices around caffeine and alcohol. Probiotics and prebiotics can also have a meaningful impact on your digestive health.

So what can you do to improve your poop? A whole foods, plant-based diet is a great place to start, but if there’s a key takeaway here, it’s that your poop is an indicator of your overall mental and physical health.

Here at Commune, we frequently talk about personal health as a holistic amalgamation of mindset, movement, nutrition, rest, purpose, and community. Your body is an incredibly complex web of interdependent systems interacting constantly with many other complex, interdependent humans.

Maybe one of those jewels is right there in your toilet bowl.