Commusings: Being There by Jeff Krasno 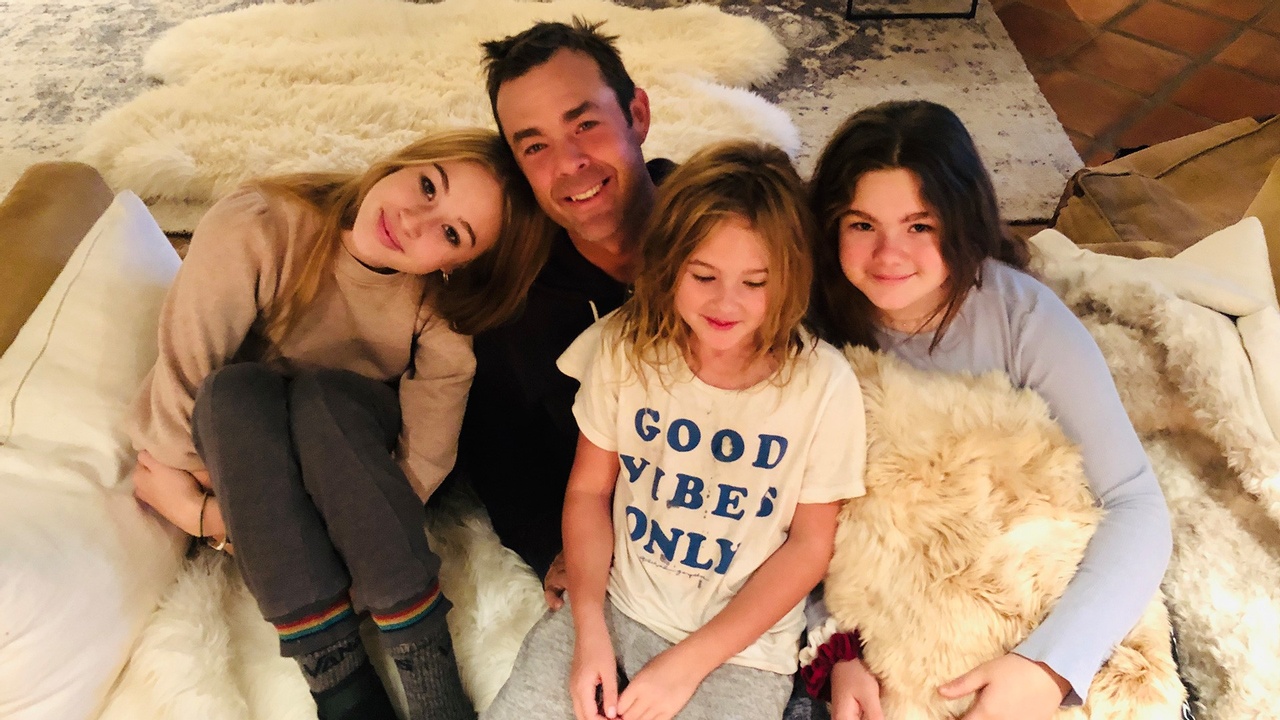 Despite my daughters’ explicit canceling of Father’s Day, the holiday is commemorated today in the United States — at least, by others. While I won’t be a recipient of a beef jerky bouquet (a real gift!), I am still free to ruminate over fatherhood and its vicissitudes. And I share these reflections here with you today.

Drop me a line anytime at [email protected] or follow my regular rants on IG @jeffkrasno.

They barely notice me retching and dripping with sweat, tangled in the sheets of my wading pool of a bed. They traipse through my room to draw a bath or to steal my phone charger. I am desperate for some quiet yet they stroll nonchalantly by the laundry room never once considering disarming the incessant end-of-cycle dryer buzzer. I’d saw off my pinky toe to sleep this horror off, but they stomp like elephants through the house and scream with abandon about TikTok videos. To my horrible-adorable children, good old dad, is just “there”- like a treasured family heirloom, a seldom-used silver platter balanced precariously on the shelf.

I have just perspired, shivered and moaned through an epic 5-day stomach influenza. Incessant surging nausea coupled with a racking body ache that one might suffer at the hands of a world-class pugilist. All output and no input. Neither food nor drink found even short-term shelter in me. But more, my condition was so pitiful that I couldn’t read, look at my phone or even listen to a British man read the Tao at half-speed.

Somewhere around hour 60, my cognitive function began to melt into a soup of delirium. I had recently delved into numerous fields of inquiry including an inquest into epigenetics, a foray into James Nestor’s book Breath and an examination of the ethical tug of war between fundamentalism and moral relativism. My brain started crossing synapses in a manner that produced jumbled nonsense like, “acquired universal truths can be heritable if one alternate nostril breathes.”

Of course, I vowed to forsake every possible vice if only I could recover my vim and vigor: lattes, peanut butter cups, tequila, bagels, barbecue, fossil fuels, and rom-coms – all on the chopping block. I would gladly rake pea gravel in a saffron robe for eternity if my bowel explosions would abate.

Schuyler, bless her, was a saint, toggling between her roles as Florence Nightingale and Pikop Andropov, our three daughters’ imaginary Russian chauffeur. Even at full capacity, I can’t match her parental doggedness. Her profound commitment to our children can be directly mapped on to the clogged arteries of the Los Angeles thoroughfares that connect schools, dance studios, doctor offices and friend’s houses. She fulfills our children’s outer lives.

Our household is certainly not some relic of medieval patriarchy nor is the division of our parental roles clean cut. We are playing zone defense, chasing the ball as it swings briskly from daughter to daughter. With the birth of our children, Schuyler and I both experienced a respective expulsion from the nucleus of our own lives. We’re electrons now buzzing around the outside, looking in, Schuyler perhaps in a more outer shell.

In many ways, it was easier to father when the girls were young. I read voluminously to them at night – back when their bedtime was before mine. I worked methodically through the Chronicles of Narnia, The Witch of Blackbird Pond, Island of the Blue Dolphins, Wildwood, Flowers for Algernon and The Lord of the Rings among other tomes. If there is one parental pastime that I dread and miss in profound and equal measure, it is this ceremony of reading my daughters to sleep. It tests both psychological endurance and physical dexterity. Night after night, I read to the point of my own exhaustion, alternately nodding off and listening attentively for the parasympathetic breath of slumber. I would plot my surreptitious exodus, furtively sidling toward the edge of the bed. But like a parole officer sensing illicit activity, Micah would roll over and imprison my mid-section with her flopping, lifeless, but uncannily weighty arm.

“I’m not asleep yet. Keep reading.”

Much of early child-rearing revolves around gaming sleep. For years, Schuyler and I occupied a hazy state of somnolence in the name of getting our children to snooze.

I shared a morning walking ritual with all my baby girls. I would wake up early, don a white t-shirt and then strap on the Baby Bjorn, an ergonomic carrier that created a pouch on my chest into which I could slip the tots securely while keeping my hands free. I positioned them in the carrier facing out. Then, depending on the weather, I put on a sweatshirt or parka and zipped it up right under their chin such that their miniscule head was bobbing around just below my own chin.

And off we went – cavorting first to Marlow & Sons to fetch a coffee – and then properly buzzed, we embarked – like a marsupial with its joey – to explore the Serengeti of Brooklyn.

Just imagine moving from the utterly serene oneness in utero to the boisterous kaleidoscope of Williamsburg - its brash graffiti and bustling multi-ethnicity, its wafting elixir of baking bread and diesel fumes, its cacophony of rattling overhead train cars and gear-shifting bicycle chains. This raucous, crude and glorious phantasmagoria of humanity – all soaked up by their virgin eyes, virgin ears, virgin noses, virgin hearts.

Baking under my thick jacket, pressed against my heaving chest and the drumbeat of my heart – little Phoebe, Lolli, Micah – they were practically soldered to me. But this was no womb. They were on the outside now, drinking it all in.

This epic download of information was simply an incipient recognition of the world as separate from themselves. And, of course, they will spend decades living in this separate external universe, establishing their individuality, “proving themselves” until, one day, life strangely U-turns into a project of unveiling the illusion of self.

We walked. And walked. And walked. Certain days, I vowed to speak only French. Other days, I would hum Classical repertoire for hours – Beethoven’s Ode to Joy, Pachelbel’s Canon in D, Mozart’s Eine kleine Nachtmusik. As they grew older (and heavier), they would point at things, specifically in the markets, and we would inspect each pineapple, hair dye product and plastic tchotchke with great care. Pigeons played a significant role in the unfolding drama of the city. Brrrr (short for bird) was among the first vaguely intelligible sounds that Phoebe made as she extended a crooked finger towards these flying Rodentia.

After misadventures endured across hundreds of city blocks, finally, against their will, their heavy heads would nod off to one side, drool would string impossibly long from their lower lips and their worlds would move again inward in slumber.

Knackered, I would trudge back to our loft, ever so quietly unzip my jacket and remove it. And then face the moment of truth: Could I successfully disengage their broiling little bodies from my chest without awakening them? This required both subtlety and core strength. I would fold at the waist slowly such that they rested lightly on the couch and then ever so gently unlatch the carrier to liberate myself. This routine also required the fashioning of a small, snugly nest of pillows and throws upon which to lay them. There would inevitably be a squirm, a murmur, but, shhhhh, please God, don’t wake up, don’t wake up. Task completed, I would rip off my sweat-drenched t-shirt, jump in the shower and start my day.

How I ache for the intimacy of those sweet mornings. My paternal instinct requires both time and tenderness. But my daughters’ adolescence bears little tolerance for either. From time to time, I impose a unilateral, if angular, hug but gone are the days when my breath tickled their neck as I explained how Beethoven’s leitmotif weaved through the entire symphony or how the words heal and whole share the same root.

I take advantage of the opportunity that my role as Uber driver provides to satisfy my need to give them advice. I prattle on about how one can’t be happy in the future, that happiness is the providence of the everlasting now. I point out how we are simply bobbing down a river of consciousness experiencing phenomena arise moment to moment – and how being aware of awareness provides a window into truth. However, increasingly, on these shuttles, they just talk at me. They just want to be heard. They just want me to be there. They’re busy now being individuals – dividing themselves from the external world while searching for an indivisibility of self.

My influence on them is relegated to showing and not telling. Hence, I try to be kind, thoroughly diligent with my work and eternally curious about the nature of the world. I know they see these things. Neither Schuyler nor I have ever asked our children to do their homework yet they do it assiduously and meticulously. Indulge me a slight brag, they are the best students in their respective classes. Their applied imagination sings through their artwork and dance and writing. I eavesdrop on Phoebe, outside her room, as she comforts a friend who is in the midst of a Shakespearean break-up. She is compassionate, loving and wise. She imparts, “You shouldn’t thrust the requirements of your ego on to him. You don’t need him. You, yourself, are complete.”

Of course, while our children never listen to us, they never fail to imitate us. They observe us working tirelessly - both for and on ourselves – and they have internalized this behavior. Oftentimes, as parents, we want our influence to be explicit and direct but never underestimate the immeasurable value of just being there every day, of leading a life of example, of walking an honorable, if occasionally jagged, path such that there are footsteps in which to follow.

Phoebe is in my office now, wheedling me for weekend cash. She’s going off with her boyfriend, god knows where. She makes a valiant attempt at conversation before sticking her virtual ATM card into my pocket. Part of me wishes she would just leave me alone so I can write but, of course, I know I will miss her the second she does. Inevitably, I will fund her plans but I take my time distributing the cash as if to savor my waning utility.

I give her 60. She thanks me, turns, flips her long blond hair and skips toward the door.

She smiles and gives me a “love you dad” as she flits off into the sun-soaked California day.

My hand outstretches toward her as if connected by an invisible thread. I want to run after her, embrace her, tell her how much I love her and how proud of her I am. I want to tell her the things she already knows. But I don’t. Instead, from the window, I watch her laugh, her lithe frame hinging flexibly into the passenger seat of her boyfriend’s car. She knows I will be here when she returns. This ever-presence provides her with the ballast from which she can take risk, knowing that, in failure, she has the pillow of my unconditional love to soften her fall.

The world will get the best of her – in every sense. Of course, I still want her for myself but true love is something given, not taken. It’s time to let go, to revel in the knowing that my daughters are the trees I have planted that I will never sit under.