Commusings: The Course of Nature by Jeff Krasno 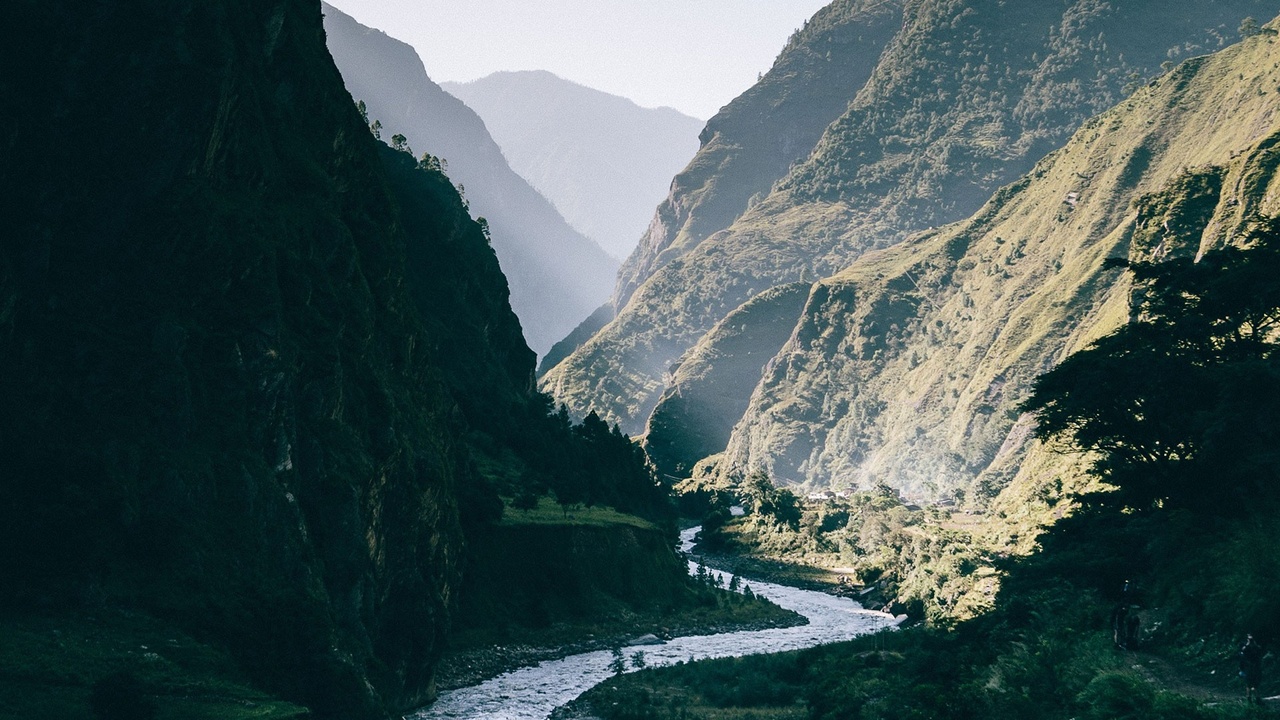 Over the last few months, I have interviewed a host of doctors including David Perlmutter, Roger Seheult, William Li, Zach Bush, Stacey Klutts, Mark Hyman and Steven Gundry. And I have episodes queued up with Robin Berzin and Kara Fitzgerald. This has obliged me to moonlight as molecular biologist. I have spent countless hours reading books, clinical trial data and scientific papers in order to be an educated and prepared interlocutor.

For months, this concentrated focus on medical science bred a mild resentment because I really just wanted to be reading Alan Watts. If you are not aware of the British philosopher, well now you are. Watts wrote and lectured brilliantly on Eastern religions in the 1950s and ’60s. (And we will soon be featuring a Watts program on Commune.)

There is nothing I’d rather do than hike the canyons and listen to Watts’ signature ramblings on the Tao. In one lecture, he uttered something that landed profoundly, “If you want to understand the metaphysical, then deeply study the physical.”

This one turn of phrase changed the tenor of my “re-search” into systems biology. Right there, hidden in the patterns of physiology and ecology, was the operating system of the universe, the Tao, the course of nature. Of course, by definition, one can never put their finger fully on it. You get a glimpse and then it’s all forgotten.

This week’s missive is an early, perhaps premature, peek into an evolving body of work that imagines Watts as a physician-type. I appreciate the opportunity to share it. Note: It’s best read with an English accent.

Drop me a note at [email protected] and follow my daily exhortations on IG @jeffkrasno.

The Course of Nature

In this article, I will unveil the foundational intelligence of the universe. Don’t trust anyone that makes this claim! The Chinese mystic, Lao Tzu, famously told us, “the Tao that can be named is not the eternal Tao.” And then he proceeded to write a book about it. We leverage words, as symbols, to explain the inexplicable.

Haiku, popularized by the Japanese poet Basho, democratized poetry. Even dunderheads like me could pen a poem. Haiku, in its finest form, expresses complex ideas simply. So here it goes … the cosmic logos in 5-7-5.

Micah runs to ring the bell

“Can I ring the bell now?” Micah solicited me for the third time as she pulled her leg effortlessly behind her head.

I dipped the soup ladle into the mammoth cast iron pot and slurped one last sip.

With great delight, she bounced out of the kitchen and galloped down the cobbled path toward the stone archway, peppering in a couple of one-handed cartwheels along the way. Hanging in the transom of the curved entrance passage is a mighty, old iron bell. Micah grabbed the twisted jute rope dangling from the bell’s crown and hoisted herself up as if to climb it, latching her feet onto the bulbous knot at the rope’s end.

The force of her full body weight on the rope caused the bowl of the bell to swing to and fro. The clapper struck the alternate sides of the bell’s mouth as it swayed, producing four deep resonant tintinnabulations that reverberated through the valley.

The toll of the bell signaled to the members of our modest community that dinner was served! Slowly, but deliberately, everyone wrapped up their respective tasks and trickled down to the communal table to break bread.

After sharing our daily roses, buds and thorns, we retired for the evening. Those of us with children read stories, and those of us without made children. This was our nightly lockdown ritual on the commune.

This affair, the process of convening for dinner, is a simple portrait of the integral and interwoven components of life: energy, information and connection.

The first law of thermodynamics tells us that energy can neither be created nor destroyed, only transmuted from one form to another. If you want to understand the metaphysical, dive deeply into the physical — for it is there you will discover nature’s fundamental intelligence and patterns.

Micah engages her wee biceps and tugs the rope, converting chemical energy generated by her mitochondria to kinetic energy, which is transferred to the bell. The bell then hits the clapper, leveraging its kinetic energy to produce sound energy, vibrations that travel through the air in the form of waves. These sound waves consist of frequency, which determines pitch, and amplitude, which determines loudness.

The sound waves produced by the striking of the bell are carried by molecules in the air until they reach Schuyler’s ear. The signature of the sound wave, determined by its amplitude and frequency, vibrates her eardrum in a specific manner. The vibrations are amplified by the three smallest bones in her body – the malleus (“the hammer”), the incus (“the anvil”) and the stapes (the “stirrup”) – and are subsequently transformed, once again, into electrical energy by cells known as hair cells (stereocilia). Sensory neurons transmit these electrical signals to various parts of Schuyler’s brain which decode them and turn them into something meaningful — such as, “dinner is ready!”

If you want to pull this thread further, you could ascribe Micah’s energy to the consumption of carbohydrates from plants, which were generated by light energy from the sun catalyzing a process called photosynthesis. The golden apple that fuels Micah’s cartwheel is a combination of energy and information. More specifically, visible light energy originating 93 million miles away through the fusion of hydrogen nuclei in the sun combined with the information carried by the nucleotide sequence of the DNA in the apple tree’s seed.

You and I are not completely unlike the apple. Like an apple tree apples, humanity peoples. We are information animated for a fleeting moment by energy.

Our corporeal lives come and go like leaves — as modifications of captured light enlivening temporary packets of information. And, in death, we don’t really die.

Yes, the instruments with which we consciously experience our own subjectivity cease to function. But neither our energy nor information is destroyed. It is passed on. We are part of a continuous energy cycle that pays sunlight forward. There is no cosmic carpenter, no creation. Just spontaneous emergence. And, in death, that which I am becomes part of an evolving intelligence.

My information: my genetics with their random mutations and epigenetic updates, the DNA of my 39 trillion gut bugs, the carbon dioxide, bacteria and viruses that I exhale in great volume, my deepest thoughts and occasional innovations, my creative artifice, my written musings, my musical writings – all of it – passes forward like a baton. My information plays its minuscule role as the 99th violin in the symphony of life’s evolution.

In physical death, nature swallows me whole, mixes me up, selects for the best of me, and reanimates me in another form. And such is the fundamental functionality of the universe. Life and death, creation and decay, inhale and exhale, wakefulness and sleep, being and non-being.

The coincidence of life on earth is a finite experience, but not one that will end soon given the sun has an estimated 10 billion more years of burning bright. Of course, there is no guarantee that visible light, electromagnetic radiation, will permeate our atmosphere. The cause of the last great extinction was likely due to a nuclear winter instigated by an 8-mile wide asteroid striking the Yucatan. The most devastating effect was not the impact itself but rather the inability of plants to absorb sunlight due to particulates in the air. This disruption to nature’s operating system broke down the food chain and 75% of all species went extinct.

This is where life – energy and information – exists in mutual interdependence. Everything in nature, including you and me, is dependent on everything else. You extirpate the wolves and the forest goes fallow. You kill the bees and the flowers don’t bloom. You kill the plants and you kill yourself. If you don’t fancy meditation and the sensation of integrated consciousness that it invokes, then perhaps this is a simpler way to put it: There’s no such thing as a separate individual. You don’t make your own oxygen.

Imagine a wonderful spider web stretching into infinity. In each intersection of the web, there is suspended a bead of water that reflects every other bead. This is Indra’s net, the Buddhist portrait of the interdependent world.

We study these patterns of nature: the swirl in marble, the striations of muscle, the grain of the wood that indicates the flow of sap, the churn of water, and the dinner bell’s sound waves. Inside these phenomena is the yin yang. Crests and troughs. Asymmetrical order emerging out of opposites. Animated information connecting with itself arising moment to moment. Utterly impermanent.

Every expression of life is a brief modification of information and energy that like a wave says hello and disappears back into the great ocean. The energy is transferred and the information is distributed and selected for.

We’re fooled into thinking that we are stable, reliable selves because one moment seems so much like that last. There is an illusion of physical continuity. But when we understand physiology, we know that we are completely unstable. We eat and serotonin floods our brain, insulin is released by the pancreas, heart rate slows, respiratory rate decreases, blood goes to the gut. And, a moment later, a speeding car careens around the corner and epinephrine spikes, digestion stops, breath and heart rates quicken and muscles pulse with blood. We’re cold. We’re hot. We’re sad. We’re happy. We’re busy. We’re bored. The only phenomenon that doesn’t change is change.

Perhaps you have a niece you see once a year. “My goodness, how you’ve grown! You don’t even seem like the same person.” Well, of course, she’s not.

Micah runs to ring the bell

Sound is a neurological function. It’s only a wave in the air until your brain subjectively decodes it. So, the entire external world is in you. And, of course, you are in the external world. Or perhaps there is nothing external or internal, just the world.

The informed energy of the bell is a social institution. It’s an agreement like time or money. It only means something to Schuyler because it means something to me. We create these contracts to connect. And this is what life does  — animated information connecting.

So, here’s the big reveal. Cue the trumpets…

It’s all just happening. There’s nothing to hold on to. So, get with it. There’s no product, only process.

There is great liberation in a life without product because all there is nothing left to do is focus your attention on the ever now. This is where you can upgrade your software. Because right now, at this very moment, you can be your highest self by simply letting go — of the anger, the outrage, the craving, the fear, the ego, the label you have for yourself. Let go of the feeling that there is a self, crouching like a tiger behind your eyes. You are the universe — animated energy connecting. And the universe is experiencing itself through you.