The Lab: What Do Beekeeping and Laser Hair Removal Have in Common? 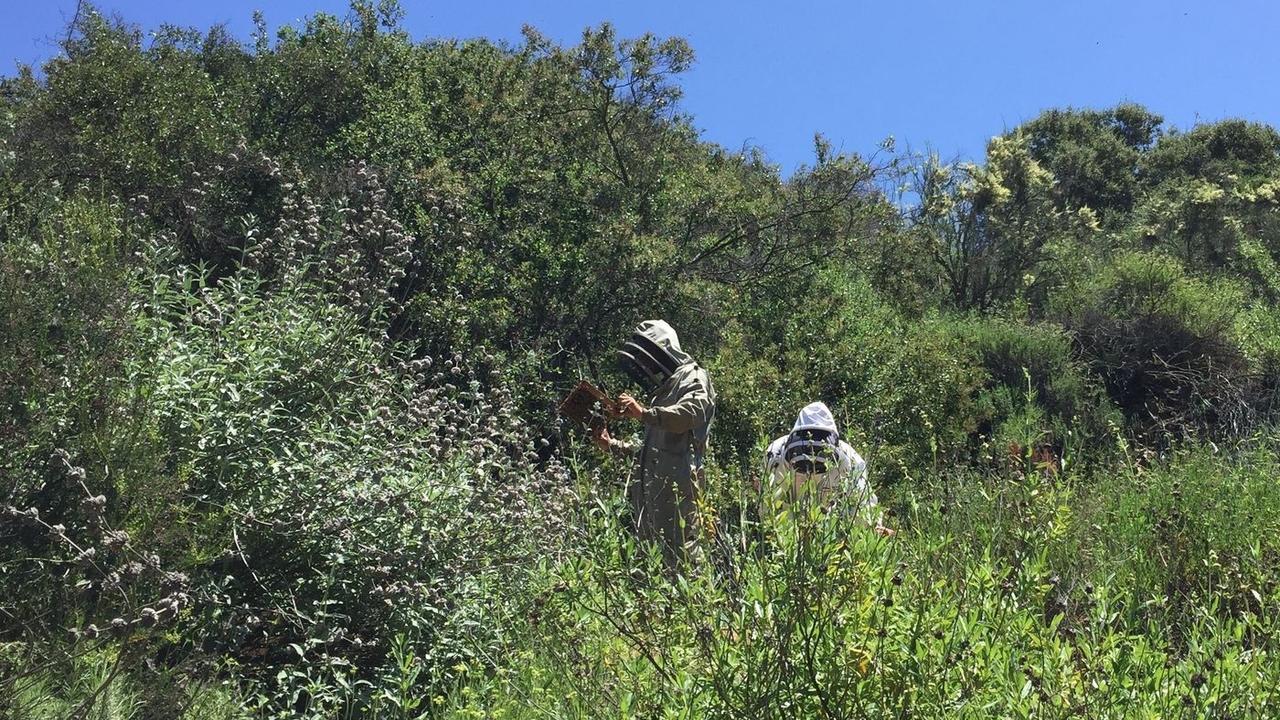 It felt like a good time to finally let the new queens out of their cages. Sunday morning yoga complete and plenty of gardening ahead — but first, the queens.

Eli the beekeeper pulled up in his truck and I donned my bee suit, covered from head to toe, minus the gloves. I’ve been apprenticing with Eli as he manages 12 hives on property, and he encourages bare hands as a way to work gently and precisely around the bees. You get stung occasionally, but you learn to coax rather than manhandle.

Today we were releasing the queens we had introduced in tiny cages 4 days ago, a straightforward procedure.

Like most accidents, several factors overlapped. Eli moved to a different hive with the smoker. I didn’t notice the hive next to me was aggravated and swarming. And as I mentioned, no gloves. Boom, boom. Two stings on my hand. No big deal, I’ve been stung before. But then three more in quick succession, air raids responding to the alarm pheromones from the first kamikaze bees.

I went inside to put my hands in ice water, then back out to watch Eli work on the last few hives. As I stood listening to Eli explain some apiary arcana, my pulse gradually overpowered his voice and my ears seemed to swell from my head.

I went to take a cold shower. Nearly passed out in the shower. Hmm, not a good sign.

Now lying on the closest bed, Eli lists the symptoms of a severe allergic reaction: full body hives, throat swelling, rapid pulse, dizziness. I check them all. I try to convince Eli that since I’ve made it 30 minutes, it will just get better, right? Both he and WebMD disagree.

Of all the days for Julia (my partner and experienced nurse) to be working at the hospital instead of home… I pull up Google Maps and search “Urgent Care” with shaking fingers.

And here’s where the story dives down the rabbit hole.

My goal is to avoid a major hospital because I don’t want to get admitted, and Google claims most of the other nearby urgent cares are Temporarily Closed, but I do see one…

I call and get an immediate response. “Sure, come down now.”

Jeff grabs us some face masks and we tear off in the Prius (obviously the Commune getaway car of choice), winding our way out of the mountains and toward modern medicine.

I woozily take this picture of my arm in the car and send it to Julia: 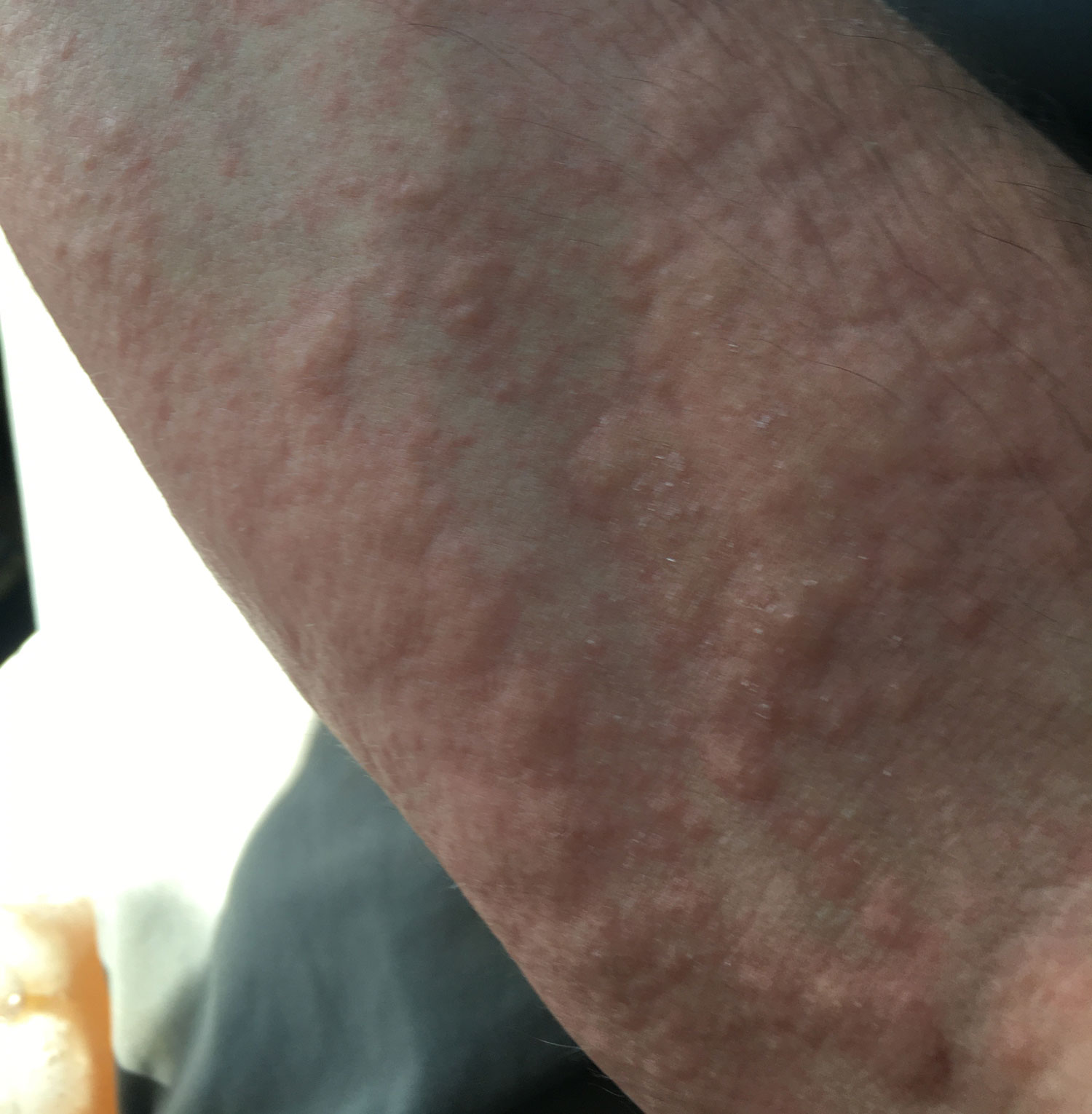 Then we pull up to the urgent care. Or should I say, Medi Spa?? That urgent care poster looks suspiciously fresh compared to the faded cosmetic surgery posters and neon Botox sign. 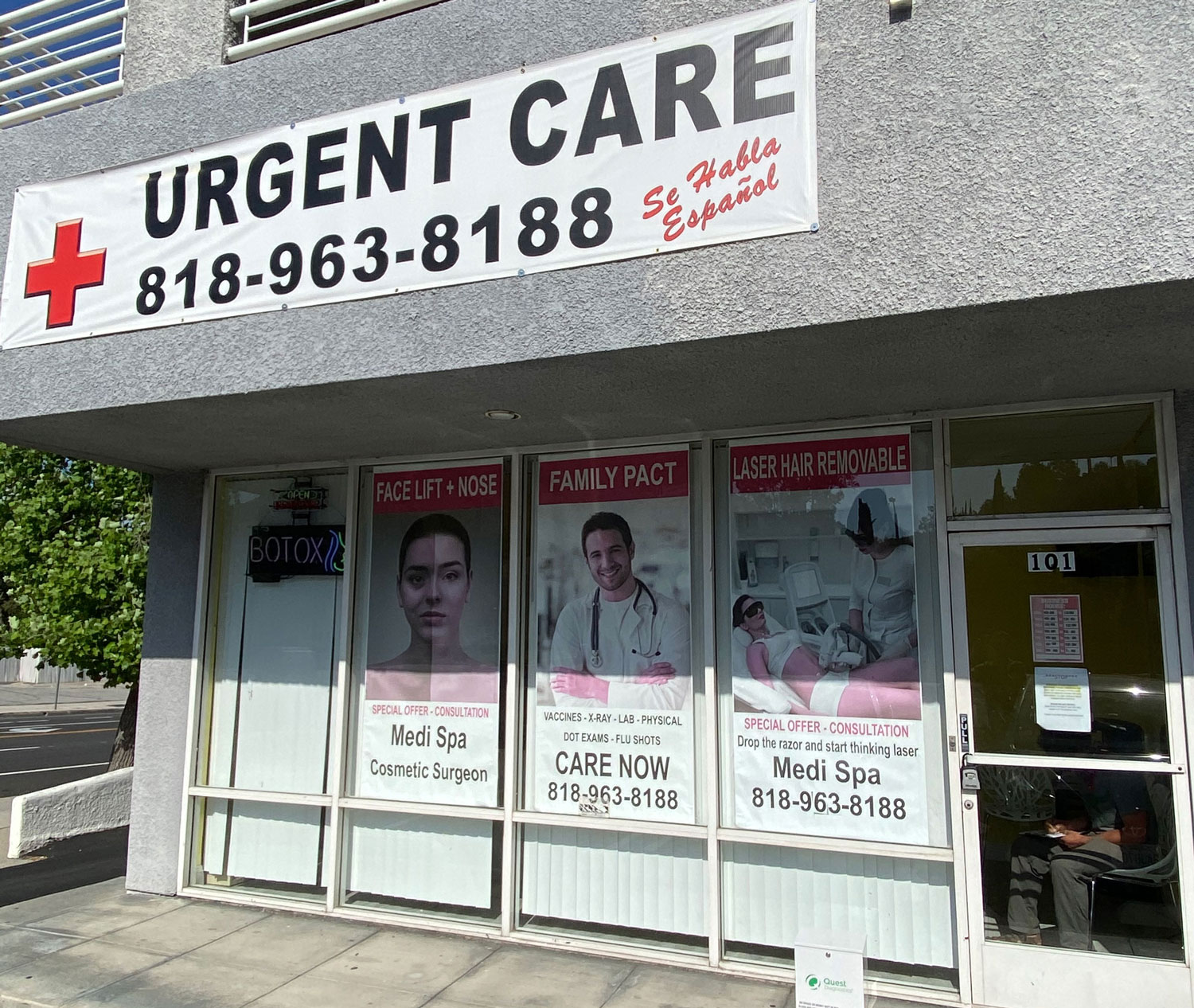 But too late now, I need immediate treatment. And my skin does seem to match that shade of red, so maybe this will turn out OK. 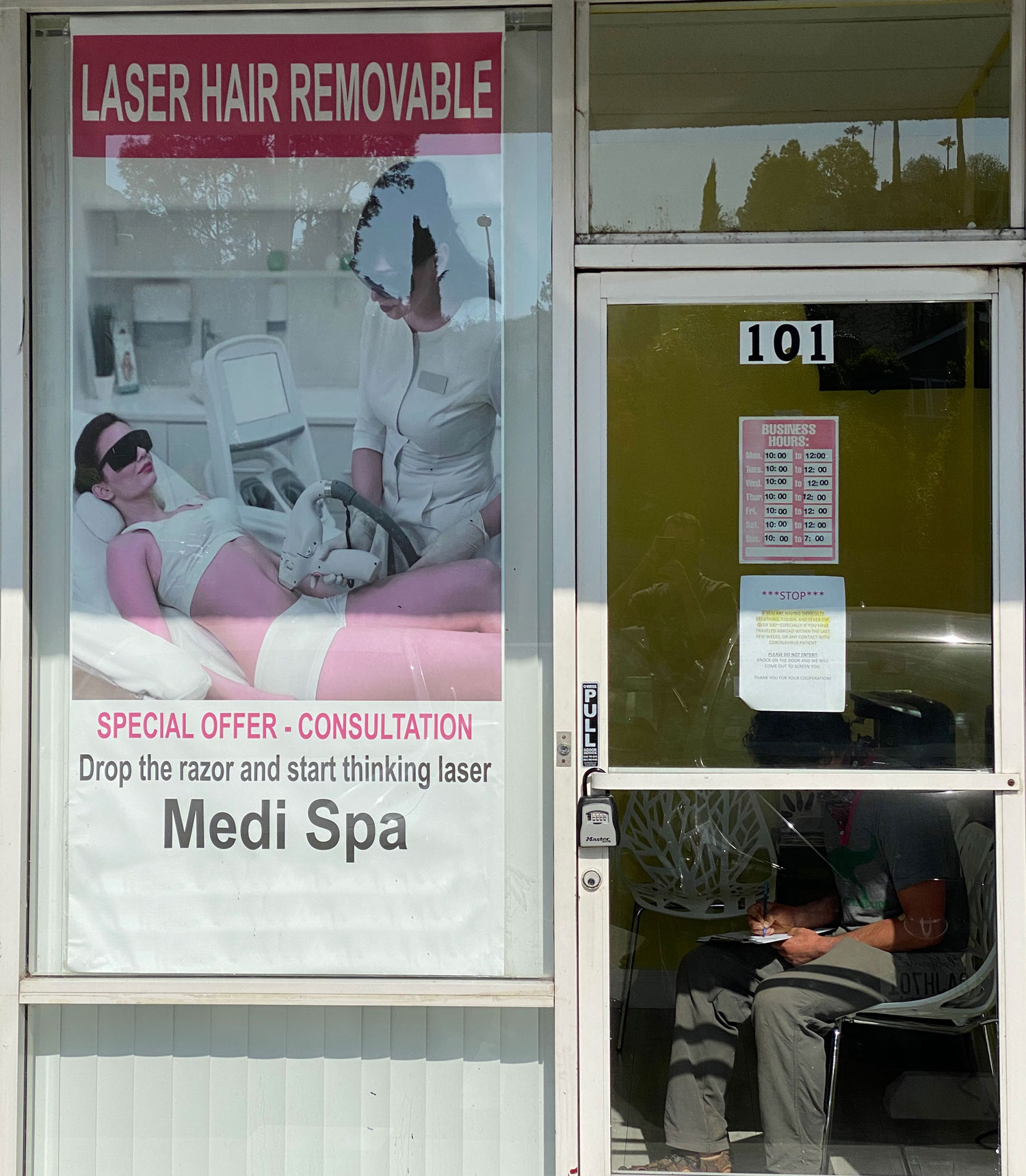 The nurse opens the door and says, “The doctor is on her way.” From where? Aren’t I at the medical establishment now? I look around. The place is extraordinarily empty. Definitely uncontaminated by doctors!

The second words out of her mouth are a perky, “It’s my first day on the job!”* She then hands me a stack of poorly photocopied forms so dense with medical jargon that I say weakly, “Um, can you help me?” (In fact, she had given me the doctor’s diagnosis forms rather than intake forms — a relevant point for later in this story.)

The entire medical supply for the Urgent Care seems to live in one standup cabinet. Fortunately, that cabinet contains antihistamine shots and an IV of Benadryl, and the doctor is professional and efficient.

As the doctor deftly stabs my arm and prepares the IV, first-day-on-the-job nurse decides to employ the line she recently learned on Grey’s Anatomy, or maybe Scrubs: “Doctor, permission to stay in the room?!”

The doctor looks over, confused. “Sure.”

I briefly pass out again, and the doctor asks, “What’s his blood pressure?”

“Oh yeah…” says the nurse, and runs to get the blood pressure cuff.

I look up and am surprised to see a large, unkempt man in the room. No mask. Possibly he is looking for hair removal services? But no, he is explaining to me that he is the owner and I need to pay the full amount of the visit and then if insurance reimburses him he will pay me back. The amount fluctuates sentence to sentence (or maybe that’s my consciousness?) but seems to hover around $250.

I have no deductible and a $30 copay. Still, I have my credit card out and handed to Jeff before the alarm bells go off in my head.

I realize that if I could call anyone in the entire world to help me in this situation, it would be my brother who works at a hospital and just set up the billing systems for several new Urgent Cares. He quickly explains that the Urgent Care had the option to turn me away before treatment, and I should have signed a financial agreement when I entered that allows them to bill me if insurance doesn’t pay — but under no circumstances should  I pay the full amount.

At this point, I am shivering from the cold IV, but there are no blankets in the lone medicine cabinet so they pull some sheets off the unused laser hair removal chairs and cover me as best they can. After 15 minutes I am stable enough to pay my $30 to the grudging owner and leave.

2 minutes down the road we get a frantic call from the nurse. “Can you come back and sign some forms?”

Ah yes, I didn’t actually sign a financial agreement. We could have continued driving and the Medi Spa would never receive their $250-ish from my insurance, but I felt for the nurse and we turned around.

Who wouldn’t want to take a second trip to the Medi Spa?

*Julia later tells me that in nursing school they tell you to NEVER tell a patient it’s your first day.